A few weeks ago a friend returned from Prague. He called it storybook gorgeous.
I went to Prague in 1990. My first impressions, arriving in March in the evening, were storybook eerie. There were hardly any cars in the streets. Few pedestrians. Dim apartment buildings. Sooty walls. No billboards, neon lights, advertisements, streetlights.
It had taken us four hours to drive the 250 kilometres (155 miles) from Vienna, because the two-lane road twisted through villages of sagging houses and barns. We had to stop for sheep being herded from one muddy field to another. Large trumpet-shaped speakers were attached to poles and trees. Hello, Big Brother.
Several months earlier the Communist party of Czechoslovakia had relinquished power. The Russians were gone. The barbed wire—the Iron Curtain—between the borders of Czechoslovakia with West Germany and Austria were dismantled.
R and I had come with my Austrian uncle who worked as a building manager for one of the first luxury hotels to be constructed in post-Communist Prague. For the drive my uncle had stocked up on large bottles of Coke and boxes of ballpoint pens. When the police stopped him for speeding, as they did several times, he gave them Coke or pens. The only other make of car on the road was a Russian Skoda which had been fixed to go no faster than 50 k/hr—according to my uncle. He’d been working in Prague for a year and was generally cynical about the city and the country.
We stayed with him in his Eastern-European-ritzy apartment: velvet corduroy sofa, inlaid wood furniture, chandelier, gauzy curtains. The bathroom had a claw foot tub the length of a porcelain coffin, but water only dribbled from the faucet.
My uncle went to work and left us to explore the city. Morning sunlight warmed the clay-tiled roofs and made the city look more friendly. We wandered without a map because we couldn’t find one for sale. We saw more people—and saw where all the fashions overstocked and outdated in the West ended up. Elephant pants. Plaid jackets. In turn we got surreptitious looks for our peg-leg jeans. Talk in cafés was loud and animated. Walls were covered with posters of Václav Havel. People stood in clusters before bookstore windows where foreign books, forbidden up until a few months ago, were propped on lecterns.
We admired the architecture—the spires, cupolas, chimneys and gables. The long Gothic windows. The heavy Baroque archways. The towers with their fancy headdresses. A terraced cobblestone walkway. The Karlov Bridge. The broad Vltava River.
Of course, we noticed the decay. Flaking stucco. Crumbling stonework. Centuries-old architecture needs upkeep which had been neglected during the Communist decades. Soot covered the buildings and statues. People heated with coal. When I returned home after five days in Prague, the collar of my blond suede jacket was black. 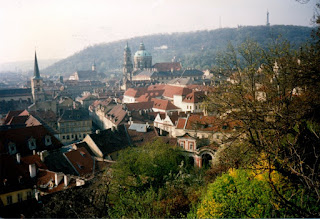 Communism was over, but shopping was still Communist era. People stood at a counter to ask for the few packages or cans on the shelves. Beets, noodles, tomatoes, carrots. A shop assistant handed them across. Once the cans and packages were gone, there was nothing left to buy. The shop assistant stayed at the counter in front of the empty shelves, because that was her job. Or there might be goods on the shelf, but no shop assistant because it was her lunch break. People waited in line for her to return in half an hour.
Traffic through the pharmacy was controlled by the shopping baskets. There were only a dozen. You weren’t allowed in the store without a basket. If there were no baskets, you had to wait for a basket to be free—even if it was only to buy toothpaste. The colourful tiny boxes next to the cash were condoms which I discovered by buying one and opening the box. Tiny boxes for tiny condoms.
The lights in the National Museum flickered. Some were completely burnt out. When I asked, I was told that there were no light bulbs.
There was no coffee. What was served in the cafés was roasted chicory that settled in the nether murk of the cup. Black sludge.
I didn’t trust the water coming out of the taps which was rusty yellow or cloudy, but there was no bottled water. Beer was plentiful and cheap with a creamy head of foam, but at some point one begins to crave water.
My uncle took us to a restaurant where one could only pay in American dollars, English pounds or Deutsche marks. My uncle insisted we have the venison with lingonberry sauce. Several bottles of red wine were uncorked and set on the table. I begged the waiter for water. He reappeared with a bottle of Evian which he held out for my approval. When my uncle got the bill, he arched his eyebrows. He said that he hoped I enjoyed the water.
R wanted to buy his father a pipe. There were two styles in the store, both cheaply made. We asked in another store and were shown the same two models. The shopkeeper said, There’s no point going from store to store. These are the only pipes and they cost the same wherever you buy them.
That was Prague—what I remember of Prague—from twenty-one years ago.
Footnote: In June 1990 the first democratic elections since 1946 were held and Vàclav Havel was elected.
Posted by Alice at 11:00 PM