I've had to rethink what I mean by the "scary" illustrations in my copy of Grimms. They bothered me terribly as a child. Some of the pages have been ripped from the book, some of the illustrations scribbled across with black crayon.

But there's no blood or severed flesh or monsters with gnashing teeth. In terms of content, the drawings are mostly innocuous. What seems to have bothered me were the nasty expressions of the characters. Their misshapen noses and chins.

For example, in the story "The Seven Ravens", a little girl was searching for her seven brothers who were turned into ravens. She travelled to the end of the world until she came to the sun, who was hot and gruesome and ate little children. She ran away to the moon, who was cold and mean-tempered, and grumbled, "I smell human flesh." 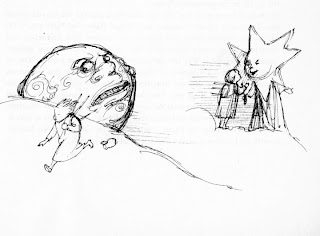 The little girl wrapped the bone in a cloth and continued on her voyage until she came to the glass mountain. She stood before the locked door and unrolled her cloth, but it was empty. She had lost the bone the star gave her. What should she do now? She wanted to save her brothers and had no key for the glass mountain. The good little sister took a knife, cut off her little finger, and pushed it in the lock which happily opened.

What frightened me in this story when I was a child was the matter-of-fact narrative. She took a knife and cut off her little finger.

Except for the moon's growling expression, the drawings in this story are harmless. 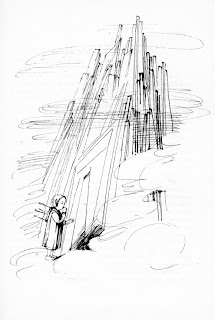