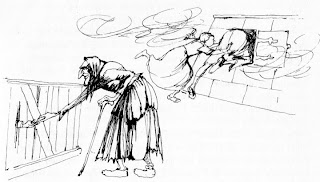 Most people are familiar with the story of Hansel and Gretel. Every version I've heard includes a house made of cookies, cake, and/or candy, a wicked witch, and a narrow escape. But there are some extra details in the story in the Grimms fairy tales my Austrian grandfather sent me.

First of all, there are 4 pgs of preamble before Hansel and Gretel even find the witch's house. We get the socio-economic context. The poor woodcutter has little to eat or to chop (zu beissen und zu brechen), and in a time of great inflation (grosse Teuerung), he can't even manage their daily bread. His wife wants to abandon the two children in the forest, so they'll have less mouths to feed. The father thinks they should share what little they have with the children. They argue, the father objects, but finally relents. Hansel overhears the plan and collects white stones, which he drops as they walk into the forest, for the moon to light their way home again. They return, their father is happy, but his wife still wants to be rid of the children. Here the narrator observes: Whoever says A must follow with B, and if once you give in, you must give in again. (Is that moralizing or fatalism?)

This time Hansel drops the famous breadcrumbs, which the birds eat, so the children stay lost in woods. For three days they eat nothing but a few berries. A snow-white bird appears to lead them to a house made of bread and decorated with cake and windows of sugar. They break off pieces and eat their fill, only to be startled by an old woman who hobbles out with a cane. She invites them inside, feeds them milk and pancakes, and puts them to sleep in two lovely white beds.

Of course, the old woman is the witch who built the house to attract children. In the event that the reader doesn't comprehend the full creepiness of the scenario, the narrator explains: When the witch gets a child, she kills it, cooks it, and eats it; and for her that's a holiday. Witches have red eyes and can't see far, but they have an acute sense of smell. When Hansel and Gretel got close to her house, she gave a wicked laugh and sneered: These are mine, they won't get away! She watches the children sleeping and murmurs over their plump red cheeks: That'll be a tasty morsel.

What happens in most Hansel and Gretel stories? In this one, the witch shuts Hansel in a stall and makes Gretel cook meals to fatten him. When he's fat, I'll eat him! Gretel cries but has to follow the witch's orders. Every morning the witch hobbles to the stall and tells Hansel to stick out his finger so she can feel if he's fat yet. Hansel always holds out a bone. The witch is surprised that he's still so thin. Finally, she can't contain her impatience and tells Gretel to fill a great cauldron of water. The next day she will slaughter and cook Hansel.

In the morning the witch already has the fire in the stove crackling. She tells Gretel to crawl into the oven to check if it's hot enough to bake bread. Gretel guesses that the witch means to bake her and says she doesn't know how to check the oven. The witch calls her a stupid goose, and demonstrates how to bend and poke her head in the oven. Gretel gives the witch a great shove, slams shut the iron door, and bars it.

There follows a page of merriment where Gretel lets Hansel out of the stall, they dance in the yard and find jewels in the house, which they take home (which they can now find), and discover that their father's wife is dead. Happy Ending, which is not always the case in this collection of Grimm's.
Posted by Alice at 9:28 PM