lessons in discordance / when i lived in toronto 1980s 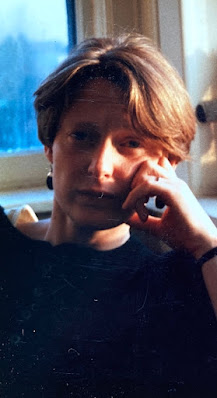 A friend was telling me how necessary it was for her to listen to music just now. I was reminded of a time when music felt like it was my lifeline.
I was living in Toronto in the 80s. I'd left the boyfriend I'd been living with for two years. I sat in grad student seminars but nothing anyone said made sense. Why was I there? Why get a PhD? My life felt upside-down and I wasn't sure how to go on.
When I told my thesis supervisor that I was leaving the program, I mentioned that I didn't have anywhere to live. He offered to let me flat-sit while he went away for a couple of months. There's some subtext here about sexual advances. You might think that should be the headline, but in those years it wasn't. I later discovered the professor had a harem of grad students. I was too dense to understand his overtures. I assumed he needed someone to water his plants and forward his mail, which I could do.

I didn't know how to get my life back on track again. Was it ever on track? Up until then, I'd stayed in school beause it was easiest.

I spent long hours reading the books on the professor's shelves. Reading was good but it wasn't helping. I longed for music. There was no stereo in the apartment and I didn't have the money to buy one. I had remembered to take my vinyl records and cassette tapes when I left the ex-boyfriend, because when I'd left a previous ex, who'd said I could return for my belongings, he changed his mind and wouldn't let me in the door. I later saw the things he wouldn't let me have at a friend's place. When I pointed out that a recipe book on her kitchen counter was mine, she said, Oh, we're having sex, I hope you don't mind. I didn't mind about the sex. I did mind about my recipe books and cake tins.

I'm older now. I don't know how much I've changed. I don't know that people change essentially, but I believe we can aquire new habits and ways of thinking. An example: I no longer listen to the music that I yearned so deeply to hear in those years. What would it be called? Experimental jazz? Jan Garbarek, Keith Jarrett, Pat Metheny, Palle Danielsson. When I hear it now, it jangles my nerves.

But that discordance was exactly what I craved when other people were listening to Prince and Linda Ronstadt and AC/DC.

So how did this happen? My father, who never drove to Toronto, showed up at the professor's apartment with a brand-new stereo and turntable. Gifts for no reason was not something that happened in my family. I don't know how he knew. I never talked to him on the phone. It's possible I told my mother that I had no way of listening to music. Or maybe my sister told him. She was more attuned to the possibility that I was depressed than I was.

For the rest of the summer, between books and making desserts on Queen St, I lay on the sofa, looking out the windows at the trees, listening very hard to how Garbarek sound-wove the shrieks and meandering of his tenor sax into a whole of sorts. It helped me feel I could take the discordance in my own head and move forward.

The photo from above was taken some years later. There are none of me from that earlier time.