walking from Kahnawà:ke to Montreal 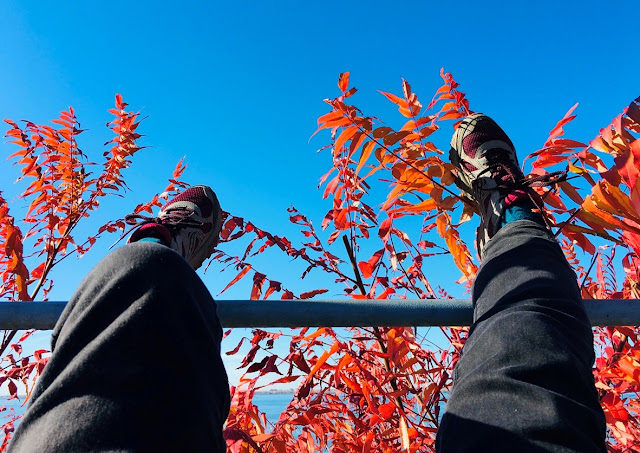 What are you going to say about today? she asked. Pink blue mauve sky. End of a long day. 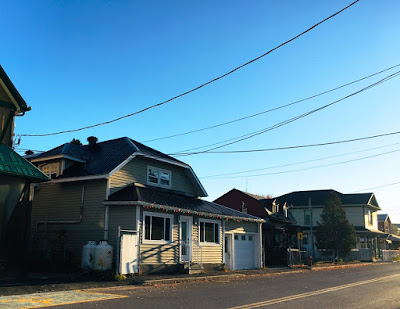 We had walked from Kahnawà:ke, a Mohawk Territory First Nation reserve on the shore of the St. Lawrence River southwest of Montreal. We'd just crossed the last bridge to get us back to Montreal. (Adding a few kilometres to the approx 25 we'd already walked.) The others had taken a cab for that last stretch but we lived close enough that it made more sense to keep walking. 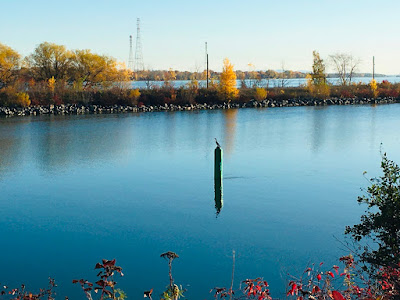 She had blonde hair looped in a bun. Earlier in the day her hair was braided. Her background was Hungarian and, also earlier in the day, we'd talked about dumplings. Bread dumplings, spätzle, cottage cheese and plum dumplings. My background is Austrian. One hundred years ago our forebears lived in the shadow or in the glory of the Austro-Hungarian Empire. Either way, I guessed we shared traditional dishes as conquerors/settlers/indigenous/survivors often do. You can get excellent curry in England. French food in Algeria, Algerian food in France. The destruction of war and bulldozers versus the persistence of kitchens.

My companion was familiar with the dumplings I quizzed her on, but she said she couldn't make cottage cheese dumplings in Canada. The cheese was too wet. I told her Adonis sold dry, pressed cottage cheese. That was the right kind. 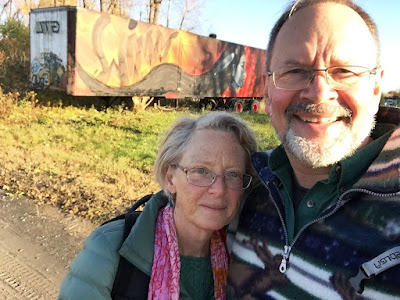 Backtrack to dawn: we took a cab to Kahnawà:ke from Montreal. The sun hadn't risen yet. We were going to walk across land from which the Mohawk had been expropriated--in some cases forcibly dragged from their houses--in the 1950s. Why? So that the St. Lawrence Seaway could be built.

The walk was organized by a friend, Matthew Anderson, who is a long-time pilgrim, committed to "bodily territorial acknowledgement", including a 350-k trek across Saskatchewan. See his blog for countless tales, photos, and documentation of long-distance trekking with a pilgrim's sensibility. https://somethinggrand.ca/ 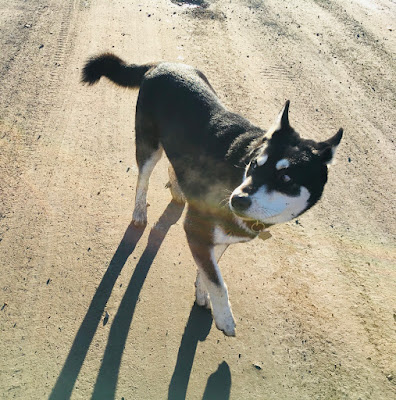 Except for birds, Kahnawà:ke didn't seem to be awake yet. Few cars, no people in the streets. A Husky appeared, gave us a once-over, maybe saw we had maps--maps?--decided to be our guide. He made sure we stayed together, kept an eye on the laggards snapping pics. He only left us when we stopped for breakfast. 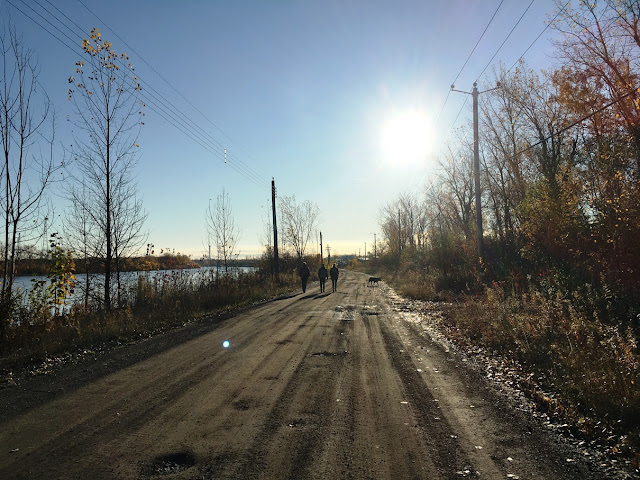 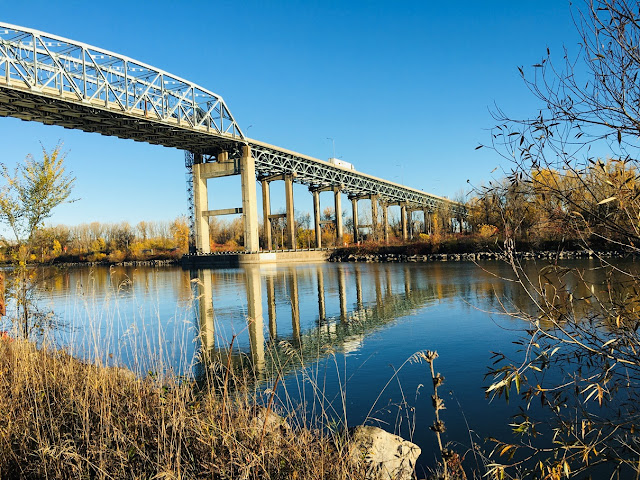 Our path took us under the Mercier bridge, which I had only ever seen from the Montreal side as a bridge. If you've never had a look under the structures that support what we take for granted, give it a try. That applies to more than bridges. 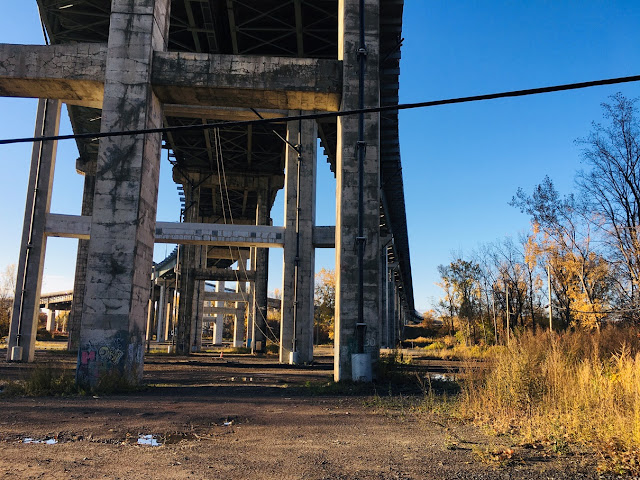 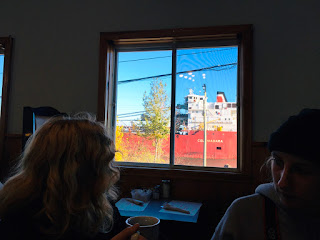 For the first part of the walk we were eleven, then only seven--and for a while a cyclist bearing apples and trail mix joined us. Where people used to live, now ships the size of apartment buildings drifted by. When we were having breakfast, a ship larger than the diner loomed past. That's how close the Seaway is.
At Friend's (which is how it's spelled on the sign) you get a big old-style breakfast with eggs, home fries, toast, sausage, ham, bacon and beans. If you're looking for it, on Google Maps it's called SunnySide Diner. Kahnawà:ke real life versus Google reality. They have pancakes and French toast too. Real maple syrup. 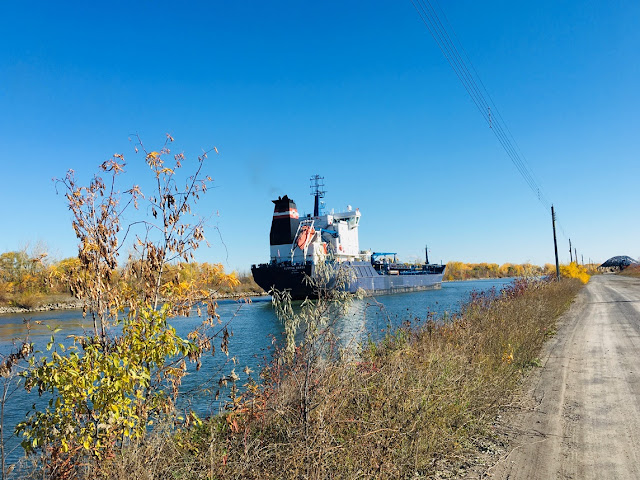 We each had different, though often similar reasons for doing this walk. By being there, I felt I was showing my awareness that land had been taken--and that ownership of part of the land we were walking on was still disputed. As someone else in the group said, she was there as an ally. It's a small gesture but one I was making with my body. Walking walking walking. Bearing witness with my steps. 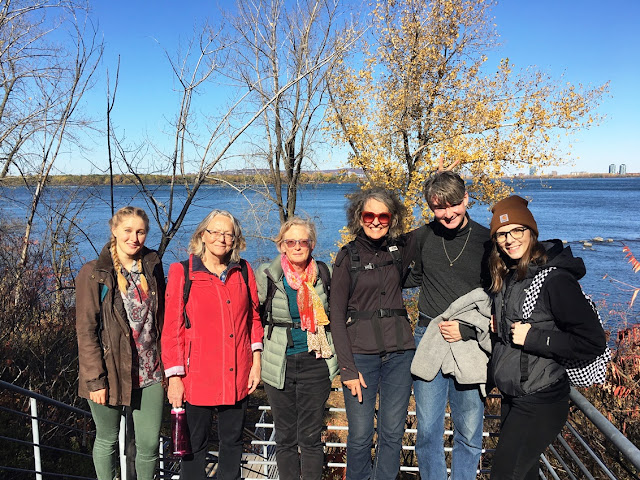 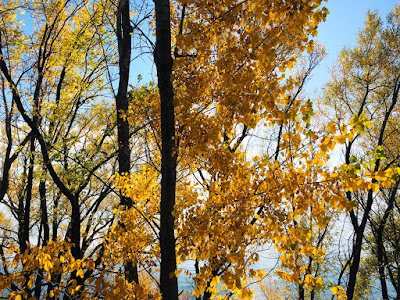 For years I've cycled on the bike path along this narrow strip of land that divides the St. Lawrence River and the St. Lawrence Seaway without knowing that once upon a time--not so long ago--there were houses here. People were taken from their homes. Houses were bulldozed. Families were resettled to live within the smaller borders allotted to them. Allotted to them by what power?

My family wasn't in Canada when this happened, but the ones who took the land made it possible for all our families to come here. None of us have clean hands. 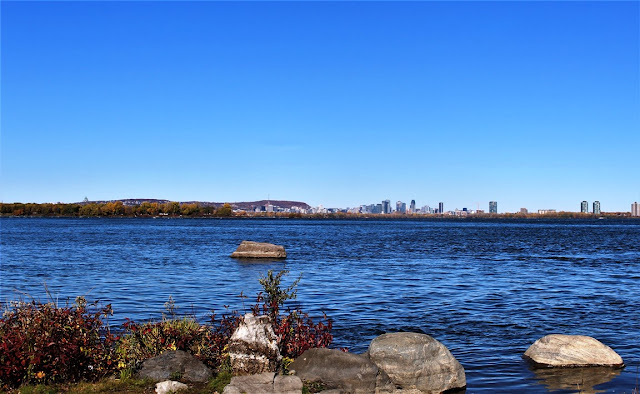 As we walked, we talked, formed loose groups, drifted apart, walked alone, formed new groups. Stories were told, some very private. I suspect the meditative pace of walking was making them surface. There were no distractions. Just us, scuffing, ambling, walking along. Polite chitchat has no weight when the land is still, the city is far away--across the water, as we could see--and you have to get there with your feet, your knees, your hips. No wheels, no engines. The trees were having their last burst of glory before winter. It was a time to say what would be said. So that was an interesting experience too--how a sense of companionship is knit between people who have agreed to walk from sunrise to sunset together. 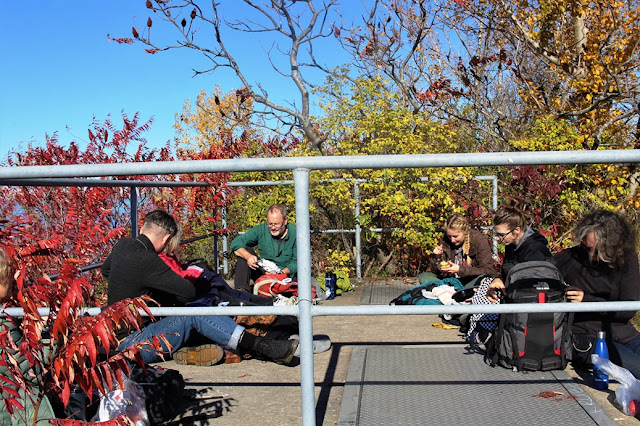 The moment that stayed with me throughout the walk--and still now--was at the beginning when one of our party led a smudge. She had sage leaves in a large, beautiful shell, lit them and stood before each of us so that we could draw the smoke into our hearts, over our heads, our shoulders. We could smell the sage smouldering in the crisp air just as the first long rays of the sun cleared the peaks of the houses of Kahnawà:ke. Light touched the iridescent mother of pearl in the shell, gleamed along its rim like a blessing. 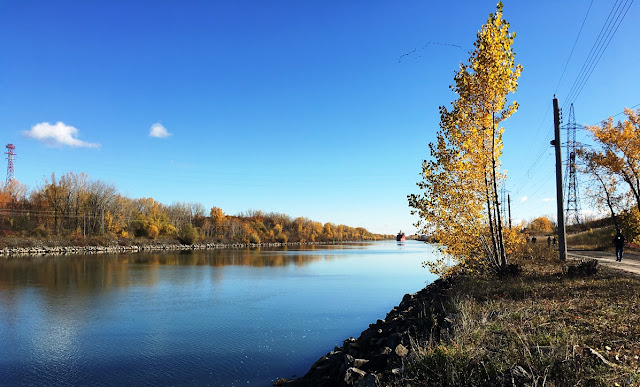 That was my experience of the walk. Those are my feet up top--when I was lying on my back after lunch.