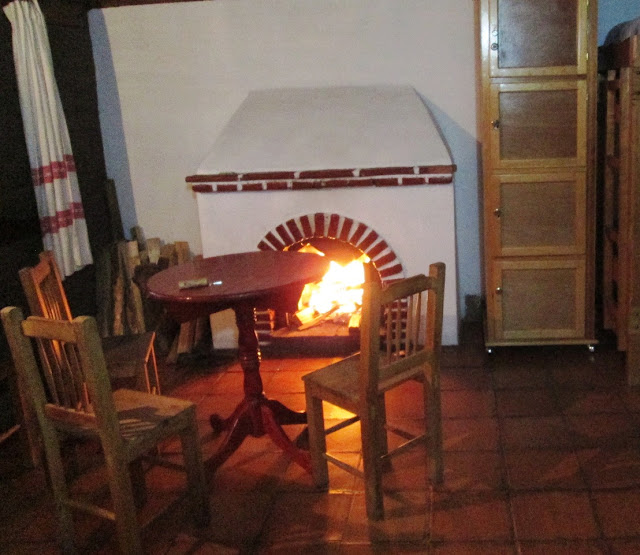 There were lots of things I didn't expect to be doing in Mexico.
Sampling dried grasshoppers. (Only one, thank you.)
Happening upon an impromptu jitterbug contest.
Meeting a woman on the side of the road whose husband had worked on a farm in Ontario.
Explaining to men digging a grave with pickaxe and shovel--the proverbial six feet down--that we were visiting the graveyard out of professional curiosity. R works in a cemetery. They wanted to know if he wasn't frightened of los muertos.
Sitting by a fireplace at an altitude of 10,400 feet which is almost three times higher than the Alpine village where the Zorns were born.

Do you see that nice fire we've got going there?

Outside, the sun had set over the peaks and valleys of the Sierra Norte mountains and the village of Cuajimoloyas below. The sheep, goats, turkeys, dogs, and roosters that had been bleating, baaing, crowing, barking, complaining, and gobbling throughout the afternoon quieted with the waning light. The crescent moon wasn't upright as I had always known it but sideways: smiling. 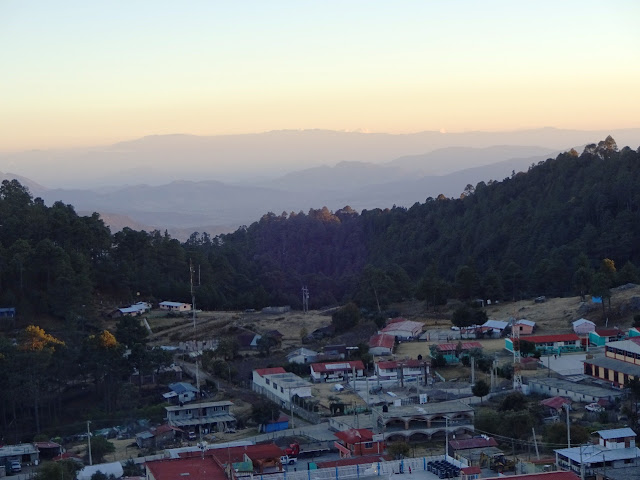 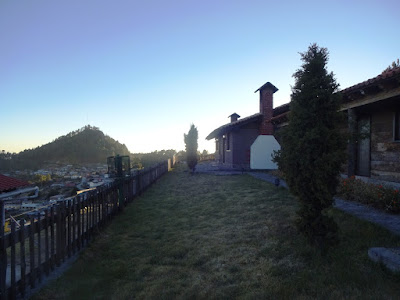 Our cabin was one in a row at the upper perimeter of the village of 1,000 inhabitants--small enough that when the afternoon community announcements were broadcast on the loudspeakers, I think everyone heard them, including us. (Ditto the next morning at seven a.m. as the sun rose, waking the sleepy roosters.) Behind us were pine trees. We were already more or less at the top of the mountain.

We were driven from Oaxaca up a winding road via Tlacolula. I still can't say that without seeing it written, though I can say Cuajimoloyas unaided. At slow speed. A guide was waiting for us at the Ecotourism Office to take us on a 3-hr hike. R found walking at that altitude hard, although at home he jogs and cycles. Strangely, I didn't. I'm the one with the health issues. 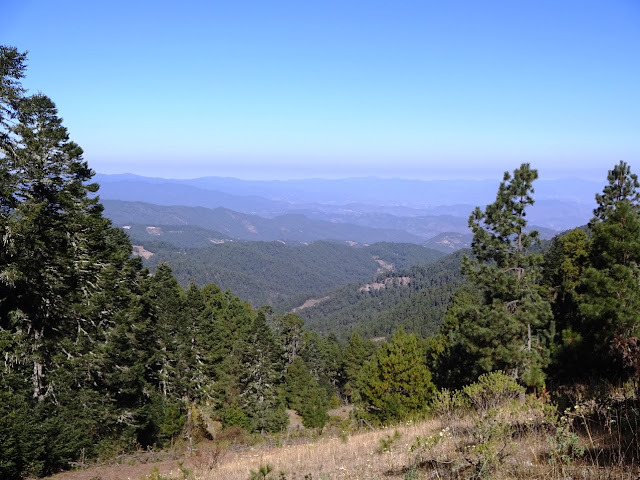 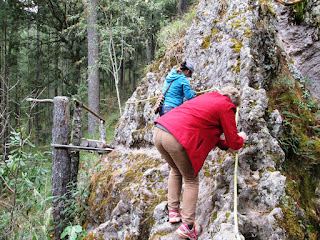 This isn't an elegant picture (me in red, the guide in blue), but I was very proud of myself to be doing anything like this at all. The drop behind us was steep, I'm not physically courageous, and I did have heart surgery five years ago. There were no footholds, only toeholds. I wished I were wearing proper hiking boots, but we didn't know that we would be hiking in Mexico.
At one point I asked the guide what would happen if we had an accident. She crossed herself and asked me not to say that. Then she patted her bag where she had a radio. Oh, I said, you can call for a helicopter. No, she said, I can call for men to carry you out. So... it was better to be careful. 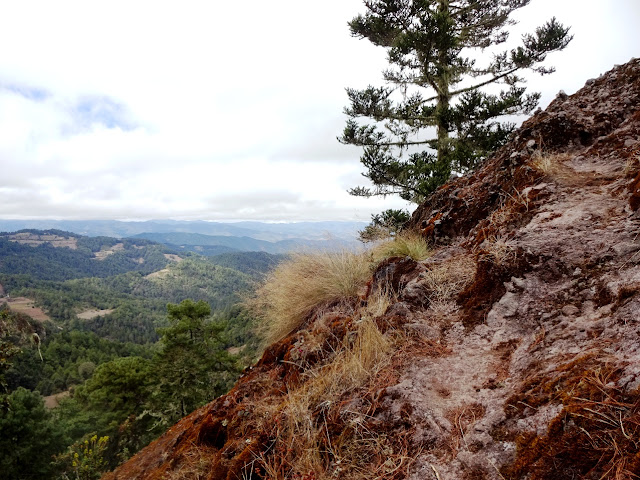 I was having a hard time understanding how high we were because there were still trees, and I'm a northerner, expecting the trees to stop growing at a certain altitude, but in an arid climate there's more vegetation as you climb. 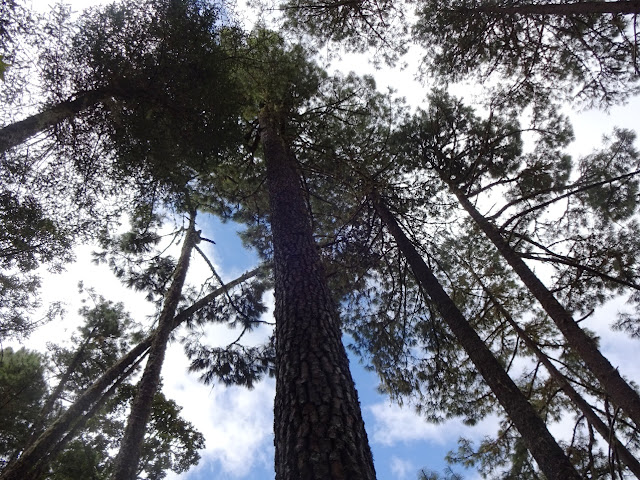 When we got back to the village, we were very hungry and happy to have lunch. The woman and her daughter who cooked it gestured for us to approach her wood-fired, brick stove and show her what we wanted. 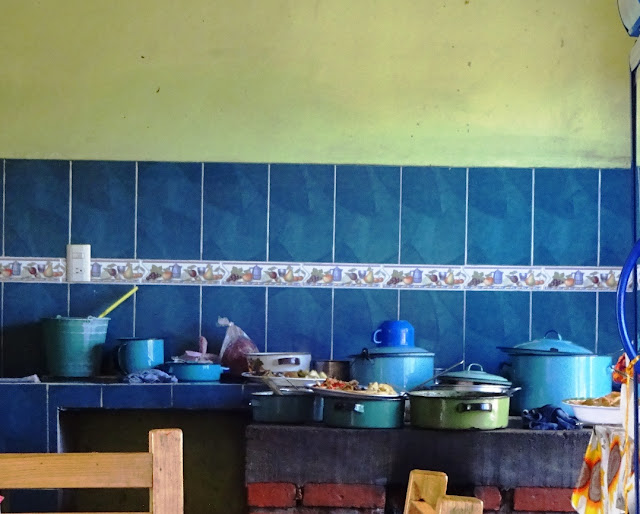 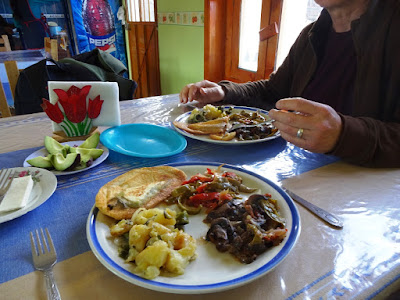 We had potatoes cooked with a leafy green, champignons, for which the region is known, cactus and tomatoes, chili rellenos stuffed with cheese. (There was meat. We chose not to have any.) And avocados. Of course, avocados. I begged her for a large cup of any kind of tea that was available. She stepped outside and returned with a handful of leaves and made me an excellent tisane. The next morning when we returned for breakfast, I asked if she could make that tea for me again.


We had another hike the next morning with a new guide. I asked both guides, and in fact all the people with whom we had dealings through the Ecotourism office, what they did when they weren't taking tourists into the mountains or ferrying them from Oaxaca to the mountains. The guides both worked on the land. A truck took them to wherever farm work needed to be done--potatoes, corn, cactus, and other vegetables with names I didn't recognize. One said she also had a small herd of goats. Another that she knit. She must knit more quickly and efficiently than I do because I could never earn enough to feed me. One man who drove us worked on an agave farm. 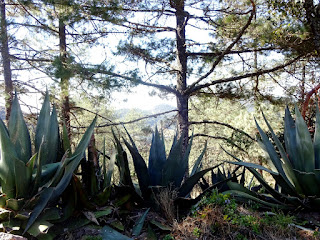 Agave, also known as a century plant, only blooms once, then it dies. It's a fierce plant that can be used as a fence. In Mexico it's farmed to make mescal. BIG business.

These agave plants look decorative, but each is taller than I am and has the circumference of a small room. And no, you would not want to walk into it. 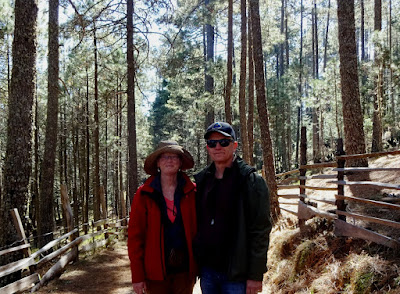 Here we are, me in my floppy hat that looks funny but it keeps the sun off my face. We're on the path back to the village where we spent a couple of hours strolling and eating tangerines under the pine trees. 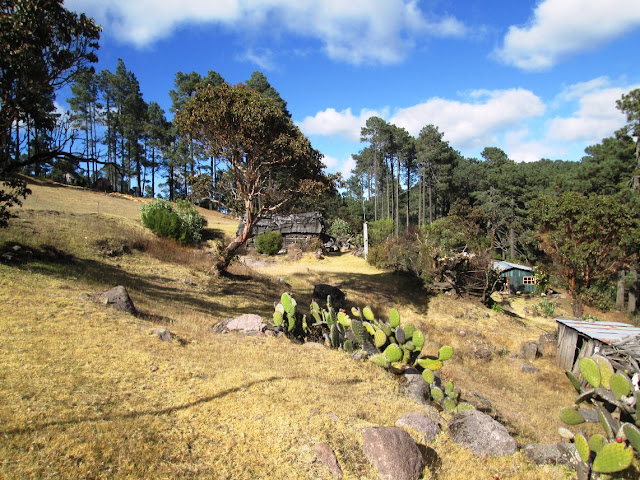 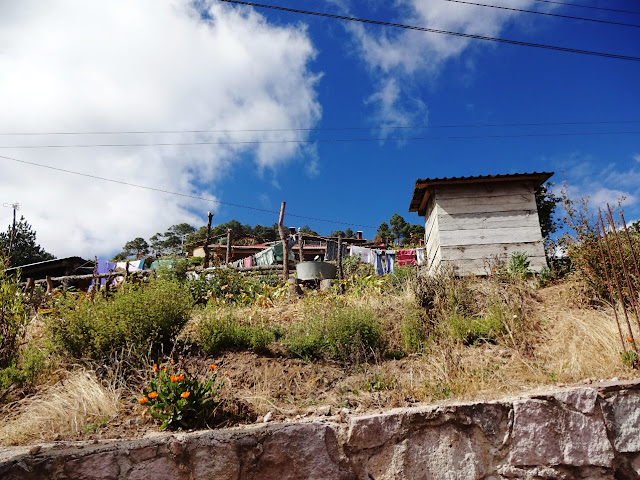 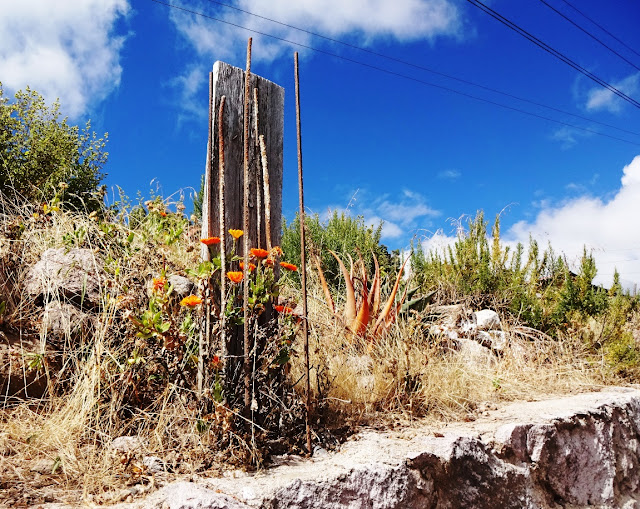 Our stay in Cuajimoloyas was a fortuitous coincidence. R saw a sandwich board outside a shop in Oaxaca. We discovered we could be driven there, stay in a cabin, go for hikes with a guide. The guide was necessary since we would be hiking on indigenous land and the trails aren't marked. This adventure was offered by http://www.zapotrek.com/  We highly recommend it. Not only was it an unforgettable experience, but profits are given to the indigenous villages who host these trips. Cuajimoloyas is one of several tiny mountain villages working to sustain itself with agriculture and ecotourism. 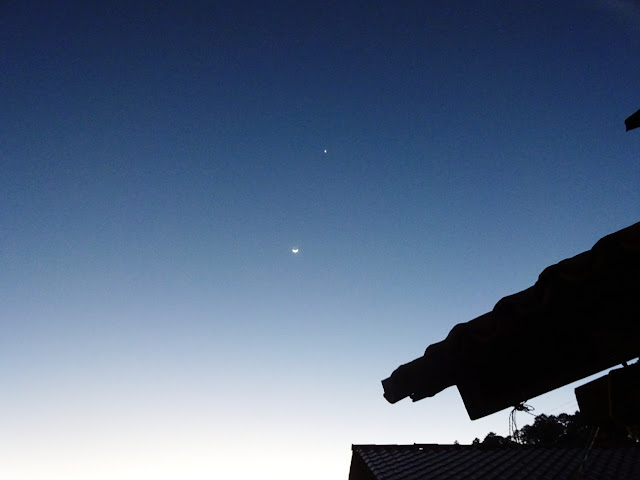