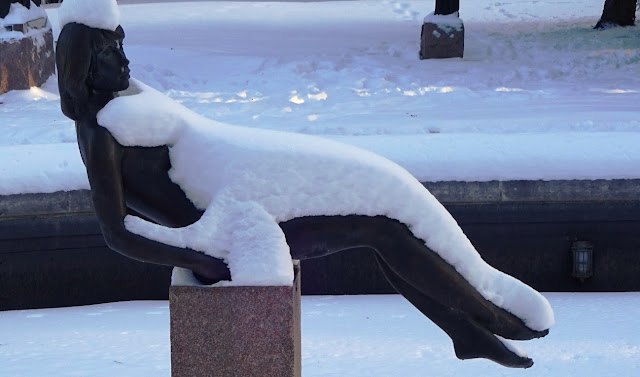 Where better to spend the shortest day of the year but in Winterpeg? True, we could have gone farther north to where the sun doesn't even clear the horizon, but we've got friends in Winterpeg. Ergo.

We went for a walk at dawn just before 8:30 am. A luminously cold Prairie sky from east to west to north to south. In Winterpeg you can turn in a circle and see the sky all around. You might never know you've got heart disease because you're never short of breath because you never have to climb a hill. That's not the case where I live in Montreal. The city is built around a low mountain. Where I grew up in Ontario, we had the Niagara escarpment--a geological formation which at one point becomes Niagara Falls. I'm used to hills, whether rolling, cigar-shaped, or jagged with rocks. So in Winterpeg I marvel at how the land s-p-r-e-a-d-s. And Winterpeg is only the beginning of the Prairies. What would Saskatchewan be like? (Someone please invite me to Saskatchewan! I promise I'll write a story--from the point of view of an outsider, of course. I won't appropriate voice.)

We walked to Assiniboine Park and along the Assiniboine River. Looking up from the banks, we finally saw the sun rising through the trees. Bare black branches... stark yet graceful. 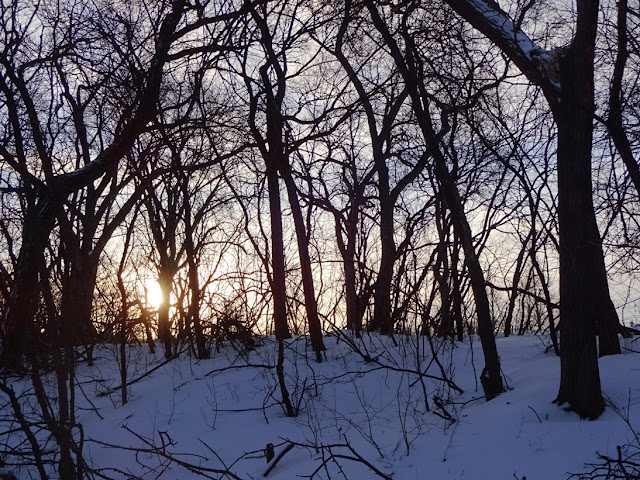 My Alpine grandmother used to complain that she lived in a narrow valley hemmed in by mountains. During the winter the sun didn't rise high enough to clear the peaks. She could see the blue sky. For someone somewhere the sun was shining! But not for her in her valley. A bitter lament--but not enough to prompt her to leave home. It was my father who left.

I had a date to have lunch with a friend in the grand-railway, Plaza-style elegance of the Fort Garry Hotel. I planned to take the bus to the centre of Winterpeg, which was not complicated in itself, but I have no innate sense of direction. That knowing-where-you-are part of my brain is permanently lost down a rabbit hole. Years ago I decided to trust the kindness of strangers.

When I left R to wait for a bus that was supposed to take me almost to the doors of the Fort Garry Hotel--all I had to do was cross the street! and, of course, get off at the right stop--I asked two fellows who were discussing municipal Winterpeg politics if they could confirm I was at the right stop. I knew it was the right stop, but it never hurts to ask. As I hoped, one offered to tell me where to get off. In turn, he wanted to know where I was from which led to talk about winter in Montreal vs winter in Winterpeg. Except then, when the bus came, the fellow who had said he would tell me where to get off remembered that he was actually getting off earlier. No problem, I said. I'll ask the bus driver who was wearing a Santa hat which I assumed boded well. He agreed to holler when we got to my stop--which he did and even pointed across the street at the castle as he called it. 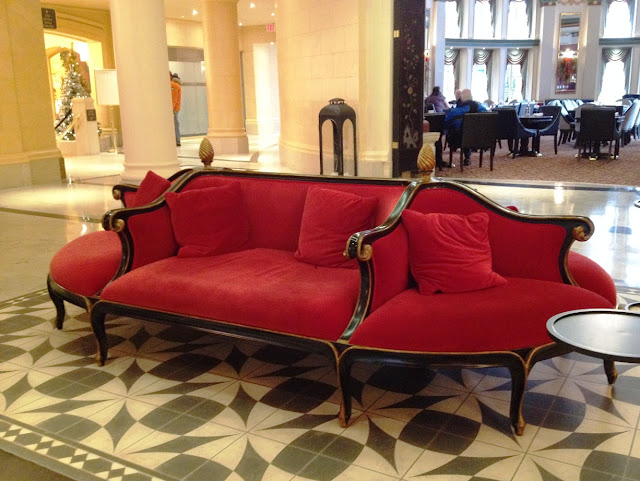 I meant to take more pictures, but my friend arrived and we had lots to catch up on.

In the afternoon R and I were supposed to go sledding with the kids. I was curious to see what kind of hill there was in Winterpeg, but desperate situations call for desperate measures. 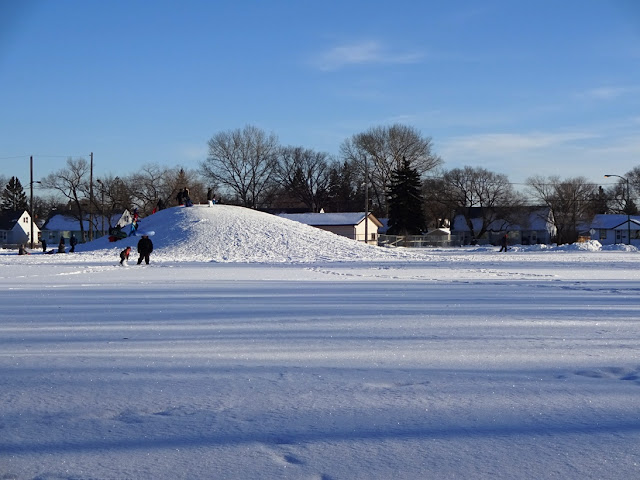 The insignificance of the hill didn't prevent R and the boys from having a grand time, inventing ever more ingenious ways to careen down the slope. For example, how many bodies and what configurations could be piled onto a single sled? 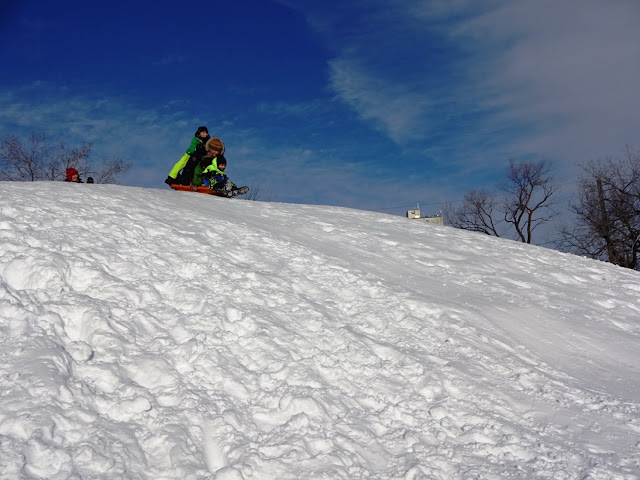 R decided against this one before they set off. Right!

I couldn't watch the madness any longer and went to make snow angels. 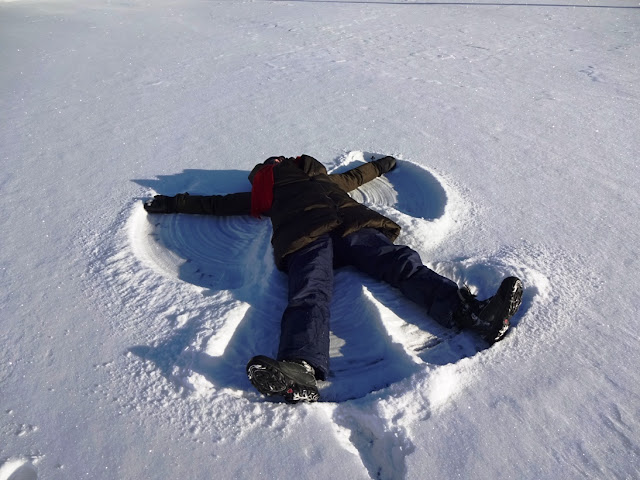 There were adventures yet. Mum had seen a carp in the grocery store and knew one of the boys would enjoy scaling and gutting it. He was very excited. He'd never before scaled a fish. I suggested he watch a few YouTube videos, not realizing I would then be the adult chosen to watch the videos with him. (Grimace.) Dad came home and suggested a paint scraper would work better than the back of a knife. It does. It's also not as unwieldy to handle.

We ate carp for supper that evening. Me... maybe less of it.

Another feat of derring-do: a game of chess. Six years old is not too young when you have older siblings to explain the rules. One rule was to learn how to be a gracious loser. That wasn't as easy as understanding the moves a bishop or pawn could make. 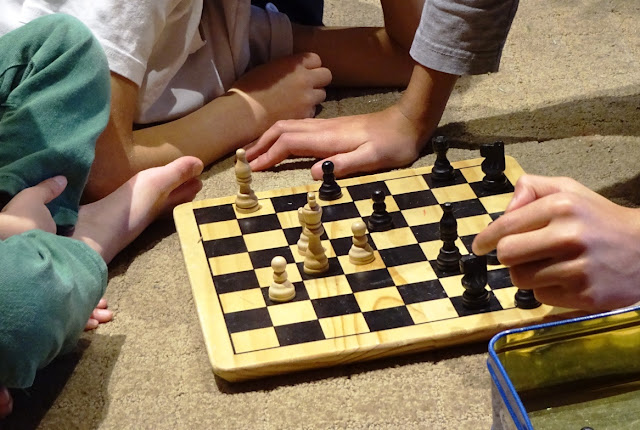 Mum asked for volunteers to make marzipan holly berries for the Christmas cake. That was when we discovered I had never seen a holly berry in real life. I was making cranberries. Way too large!
Somewhere among the toys an elk was found to impersonate a reindeer. 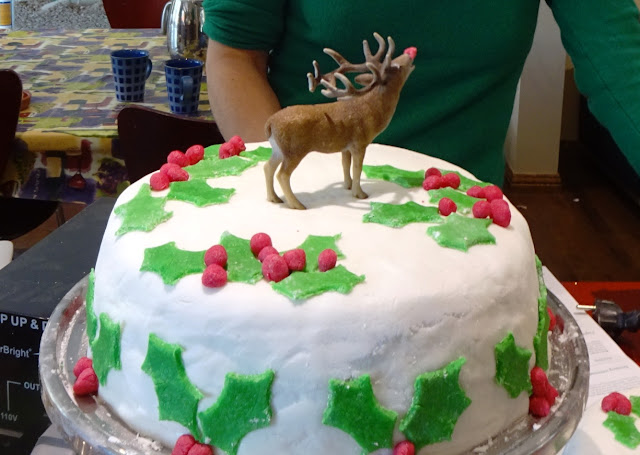 R had decided to help the eldest of the boys in his competitive swimming by giving him an arm extension. He, in turn, tried to educate R to the delights of Instagram. 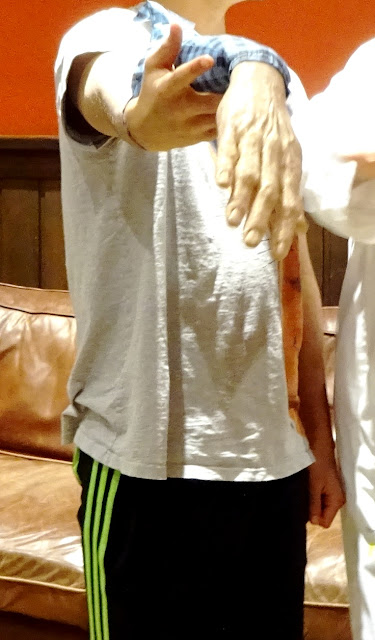 By now it was time for baths and bed. I read a chapter of The Hobbit--which I haven't read since... 1970? Hey there, Gandolf! Well-met in the company of three rapt children.

Did I mention when the sun set? Just after 4 pm. 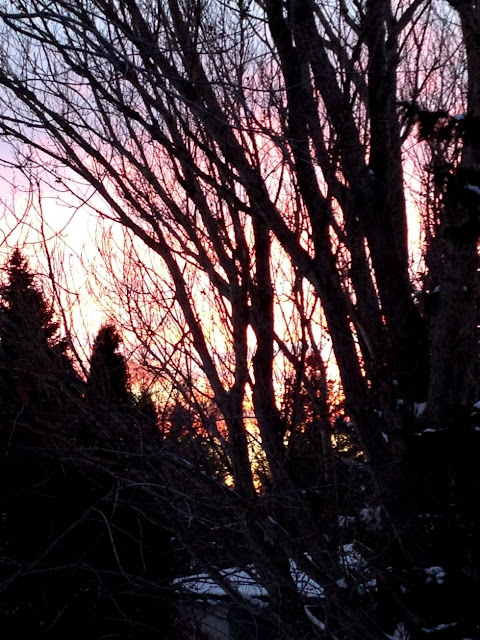