a society of many stripes and hues

It is wonderful to live in Canada where we have the opportunity to come into contact with so many cultures. There is different music and dance, the influence of different literatures and art, exposure to different social moeurs, different ways of dressing, different foods. How restrictive and narrow-minded it would be to close oneself off and live in a world that is only familiar.

I delight in the differences that are available in our society. One particular aspect is FOOD. I've heard it said--don't know if it's true--that a person could eat out every night for a year in Montreal and every night enjoy a different cuisine. For sure, there's a lot. I worked for many years at a hospital with people of various ethnic backgrounds, and was able to sample dishes that were Filipino, Trinidadian, Rumanian, Pakistani, Greek, Haitian, Lebanese, Eritrean, Russian, Bajan, Argentinian, etc. A couple of times, when we weren't busy, someone would pull up an image of a fruit or vegetable on the computer to tell us what it was called in their country. Breadfruit, for example, had many different names and uses. Avocado can be served either sweet or savoury.

It was an honour for me to learn how to make dhalpuri roti from my sister-in-law's mother.
http://alicezorn.blogspot.ca/2012/08/dhalpuri-roti.html

Holidays are times when food takes on special importance. Coming from a western Christian tradition, I'm familiar with Christmas desserts. Note that I, too, am a child of immigrants from elsewhere, so I didn't eat the standard shortbread cookies that are often served in Canada among Anglo families. At our house our mother and her German friend got together a few weeks before Christmas to do the Weihnachtsbäckerei. These are many different kinds of cookies either layered with apricot jam and dipped in chocolate, or formed in an S-shape and glazed with lemon icing, or made with ground hazelnuts and rum, or topped with an almond half, or rolled in black pepper... In our house, on Christmas Eve and Christmas Day, we didn't ham and turkey; we gorged ourselves on Austrian cookies. 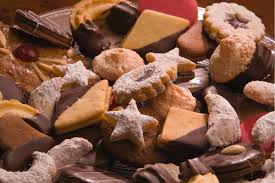 As an adult, I've sometimes baked Austrian cookies from the old cookbook my mother brought from Austria when she came to Canada. The cookbook belonged to her mother before her. In the cookbook, one woman makes a check mark next to the recipes she likes. The other makes a cross. Rarely do they like the same one. The recipes themselves pre-date electric mixers and stoves, so the instructions call for beating egg whites for 45 minutes until stiff (with a fork), and to bake cookies at middle heat in the wood stove.

Fact is, I don't care much for sweets and I don't get excited about Austrian Christmas cookies. R does, but when I make them, he inevitably observes that they aren't as good as my mother's. My feeling about nostalgia is that it's best left alone. Let him remember.

The Christmas dessert which I do really like is the UK version of fruitcake. Ideally it's made almost a year ahead of Christmas. It's dense and dark and chock-a-block delicious, filled with chopped, dried fruit and nuts, drizzled every two months with brandy or rum, and wrapped tightly again. After a year of this loving, boozy treatment, the nuts have softened, and the cake and dried fruit have melded.

However, I'm not that organized to make Christmas cakes a full year ahead, which is why mine tend to crumble rather than slice. The earliest I can manage is September. Last week I bought a kilo of dried fruit and almost a kilo of pecans and almonds. I bought all fresh spices which is another September ritual. Baked the cakes last night. 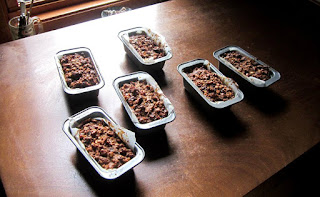 In my roundabout way I'm saying that I believe living in Canada can only be a richer experience if we welcome many cultures--and we have the space and the means, so I don't understand why our government is making such a piss-poor showing during this time of world crisis.