I like the ones that might more properly be thought of as dessert since they're sweet--only these can be served as a main meal. I'm talking dumplings--and today it's cottage cheese dumplings aka Topfenknödel, served with plum compote aka Zwetschgenröstl aka Zwetschgenpfeffer. Zwetschgenröstl is a dialect word I've dredged up from memory. Google can't find a match. I love coming up with words that stump Google. Perhaps I should doubt that I'm remembering it correctly, but I don't. The only time I had these dumplings in Austria was with my aunt Gretl who lived in Vienna. That would be... 25 yrs ago, but I still have the sound bite in my head of a Viennese waiter drawling the word. Google wasn't around then.

I made the plum compote last summer. I don't normally do such housewifely stuff, but I like being able to have a taste of summer in the winter, and I've learned from experience to make a few jars of something that will keep in the freezer, since I can't be bothered with wax and proper canning procedure.

The dumplings are boiled then rolled in buttered, browned and sweetened bread crumbs, and served with plum compote on the side. 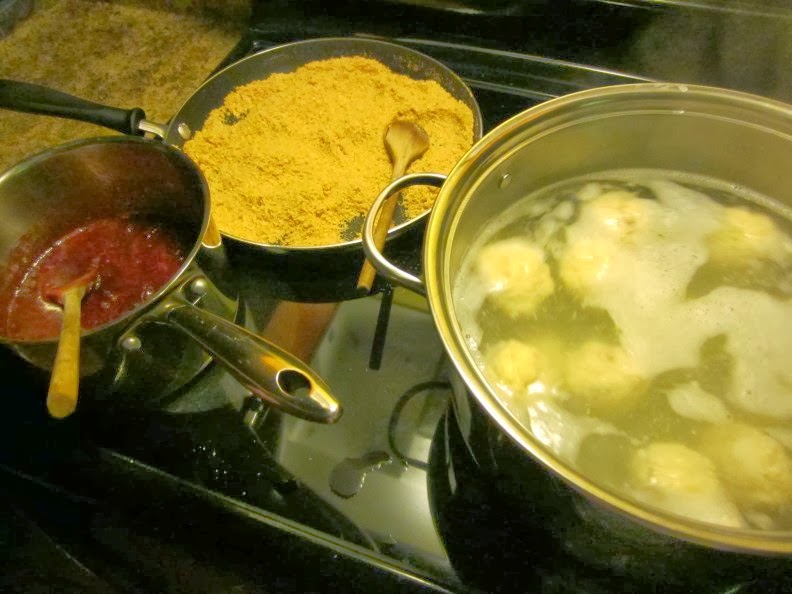 Maybe you need to have an Austrian background to accept that this can be supper. I did make a big salad--greens, roasted eggplant, avocado--to have as a starter.