As recently as ten years ago, when I walked into a shop, people called me Mademoiselle. One day I became Madame, and increasingly the world acknowledged that I was Madame. Since I was already middle-aged (one half of my life over unless I live until ninety), I could hardly object.
But hey, what happened? Last evening I went to a movie. The young woman at the cash only charged me $8.50. R handed over a $10 bill to pay for his ticket. She looked surprised and asked if he had proof he was over 60. He didn't because he isn't. Nor am I!
I looked at my ticket. Senior citizen???? No offense to senior citizens but I don't intend to join your ranks until I'm one.
Is it because I don't dye my hair? I'm not even completely grey/white yet--as R is. My hair was up in a bun just like the much younger woman behind us. I was wearing a top I'd bought at Zara. I don't have  granny glasses. I have wrinkles--you will too at my age--but the lighting was dim.
I don't mind getting older. I certainly prefer it to not getting older, which means being dead.
I wanted to ask the sweetie at the cash WHY she'd decided I was a senior citizen at a glance--without asking me for proof--but she wouldn't let R pass. (But I didn't feel like handing over another $3 if I didn't have to.) I wanted to know what she saw. 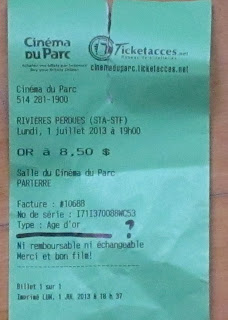