I'd said I would write more about the art we saw in Berlin. And the subways.

Subways, you think. So what about subways? We'd gone to the land of das Auto. Mercedes Benz and Volkswagen. I was brought up believing that German-made cars were the only automobile worth driving. My father still drives a Volkswagen. For the only year of my life that I owned a car, it was a VW bug.

Given that background, I had high expectations of the Berlin subway. I assumed the trains would whizz faster and more soundlessly than the trains in Montreal. They did not. In fact, it would hard to decide which subway cars rumble worse, Toronto's or Berlin's.

What I loved was seeing above-ground trains moving past pre-Industrial Revolution façades. 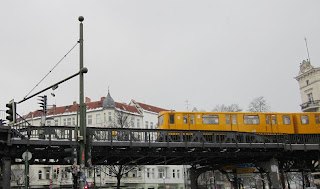 This next one is surely a reconstruction of something historical that was bombed in WWII, but you can't keep thinking like that when you're in Berlin or you don't know where to look next. 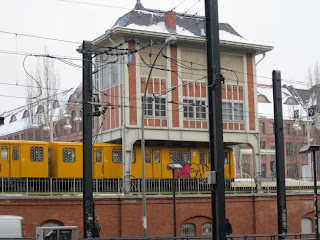 I like cities with rivers and bridges and canals too. This bridge is called Oberbaumstrasse Brücke. 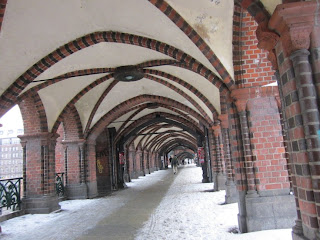 Ober means over. Baum means tree. Strasse is a street, except that in this case it’s a bridge. The bridge is a street that goes over the trees. Technically, I suppose it’s more important that it goes over the river, but Overtheriver Bridge would be too weird a name, even for matter-of-fact Germans.

Often, when we walked by the canal, there was snow. (As a footnote, R tells me that this past March was the coldest in Europe in 130 yrs. So... not just me being neurotic. It was cold. On the other hand, we're living in a time of climate change. Whatever's happening now, get ready, because it will only get worse.) Here's a picture from our last day when it got a bit warmer and the sun stayed for more than 0-2 hours. Did I  mention this yet? In Germany, weather forecasts come with predicted hours of sunshine per day. The weather forecasts in Germany are no more accurate than anywhere else, but I guess they like having another category. 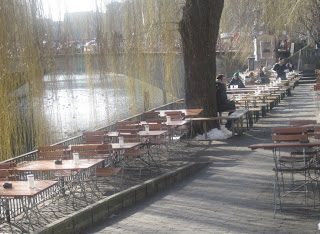 We saw a lot of art in Berlin--excuse me, Art.

I will not pretend to begin talking about Art. What I often notice are the people looking at Art. I listened in on some kids who’d been taken to the museum to learn what to look for. They sat on the floor in front of a large abstract. Now, I have always assumed that one isn’t meant to see figures in an abstract. If there are figures, then it’s a figurative painting. Abstract art is about colour, lines, harmony… Isn't it?

In this world-renowned gallery in the big city of Berlin, the teacher—who wore a beret!—was asking the kids what shapes they could see in the medley of colours. One boy saw some hatched lines that he thought was a railroad track. Another decided a yellow blob could be the sun. One sweet thing piped up that she saw two raindrops. I loved that she saw raindrops. Some people, seeing the two side-by-side drop shapes, would have said teardrops. I’m sure.

I got a kick out of this woman who’s looking at a Henry Moore as if she walked up against a mirror. 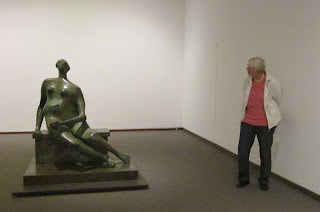 Near our hotel there was an elementary school. The Grade Sixers had been taken to a museum to look at Picasso and had done copies with all the clothing in fabric collage. Okay, the idea must have been the teacher's, but the kids did a great job and had their projects on display in the school windows. 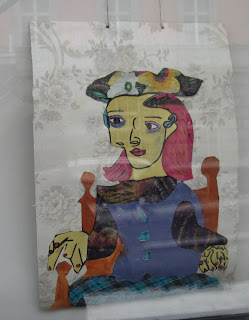 In the courtyard beside the school was the entrance to one of Hitler's bunkers. During the day, there was always a lineup of tourists to get inside. Eingang zum Bunker. I don't know what bothered me more: the fact of the bunker or the people who wanted to get inside. 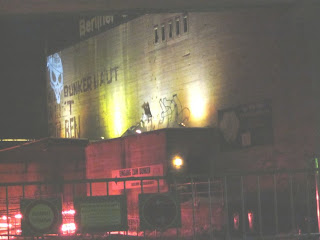