Here's a post I wrote Oct 31, 2011. You'll excuse me for reposting but here, on a snowy Montreal morning (almost noon), with snow settling on the cars parked along the street, I was feeling nostalgic for the coast and the crackling of the wood stove. Of course, the coast doesn't look like this now. It's frozen to the horizon. But I'd go, if I could get there, even with the house buried halfway up the windows in snow. 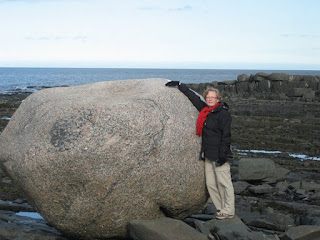 Home again. Which is good too, because much as I love being by the sea, I love Montreal as well. Here, we've got hustle and bustle, a mix of people, cultures and languages, a skyline of cornices, shopping for fancy tights, reading on the subway, asparagus that doesn't cost $4 for 12 stalks, and more.
By the sea we have a wood stove and a super wide-screen horizon of water. Except for deciding when to go to bed--and technically you could fall asleep on the sofa--and what to eat, there are no distractions. You could veg until you turn to mulch. Or delve deep into a book--reading or writing--or finish the vest you started knitting eons ago and never got as far as the armhole.
In city terms, that's called going off the grid. One of our neighbours in the Gaspé, who realized that we have no telephone, internet or TV at our house, nodded sagely and called it a "purification". You have to think that word in French said with pursed lips. If I ever wondered how the neighbours out there see us city people who arrive for a couple of weeks a year to tromp along the beach and pick up stones, there I have it. We come for a purification. That's not yogic or meditational or for physical health reasons. That's old-fashioned Roman Catholic purification.
On the last two days by the sea we could feel that winter was coming to the coast. You could smell snow in the air. The wind cut. I needed earplugs--in addition to a hat--to walk by the water. Rain, turning to sleet, lashed the windows. Dramatic skies with towering clouds.
One of the last silly things I did was to take a video of the waves washing up on the beach. Of course, that's silly. I mean... waves. I could watch a video of waves at any time on Youtube. Gorgeous aqua surf off the coast of Australia. A harsh Maritime storm in Cape Breton. People take videos of everything and anything. Recently I wanted to describe a woman's hand movements in a story I was writing. I was thinking of that Lady Macbeth motion that flies do with their front legs. "Out, damn'd spot!" Scrub, scrub. It's been a while since I had a close look at a house fly so I clicked on Youtube. Do you realize how many people have videoed flies?
I hardly needed to video the waves across from our house in the Gaspé--except that no one has taken a video of that particular shale beach with its ad hoc boulders of granite shaped by the deep. And this winter, when I'm holed up at home in the city, I'll enjoy those few moments of salty water splashing the rocks.
Posted by Alice at 11:27 AM