i shoulda stayed home and played with my toys 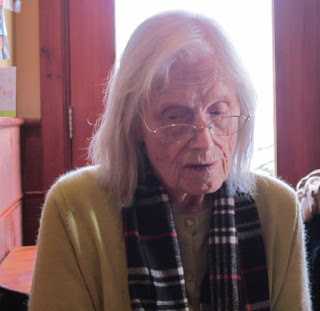 I first met Gwen in 1982. I was having a tryst with R in Kingston at a pretty limestone hotel that's since been renovated and turned into something else. R lived in Montreal; I lived in Toronto. Kingston is approximately halfway between. Rendezvous in Kingston.
My good friend RM was in Kingston visiting her parents. She and R skipped stones on the lake. We went to Chez Piggy's for lunch. RM brought us back to her parents' place where I met her mother, Gwen. What I recall about this visit was how RM sat before her mother and began to massage her feet. The natural intimacy and tenderness between mother and daughter floored me.
Gwen moved to California with her husband, but I met her now and again when she came to Toronto to visit RM, and again when she returned to Canada after her husband's death. She was light-hearted, funny, liberal with puns. She had no sense of political correctness and told jokes about Jews and gays. She would equally poke fun at herself.
She played the ukele. Her hands can't manage the strings anymore, thought she can still, as she puts it, plonk on the piano.
Music runs a deep vein through her life, and it's wonderful to see how the first lines of a popular lyric from the 30s or 40s prompts her to sing the whole song with only an occasional falter. She likes people to sing with her. Have scientists studied how people with dementia, who can't remember what they've just eaten, only need the prompt of a hum to sing a song that has several stanzas? Do songs get imprinted on a different part of the brain?
Gwen has survived the death of her spouse, one son, all her siblings. She's the last of her generation, which she doesn't always remember. When she refers to her brother or sister as still living, someone has to break it to her that the person is no longer alive. She becomes angry that, as she feels, the death has been kept a secret from her.
It's interesting that at her frail, yet stubborn age of 89 the people she speaks of most are her siblings. I wonder if this has to do with the nature of memory--whether the long-ago decades are stronger than more recent times--or the nature of the bond with the family of one's childhood.
(Is that going to be me one day, comparing my lifespan with that of my brothers?)
I'm reminded of what R tells me about clients who come to the cemetery, where he works in the office. He says many people want to be buried with their siblings and parents instead of with their spouse. I find that hard to credit. You choose your spouse. Or so goes the myth. Family is an accident, and not always a happy one. And yet, so many people, who are planning for their death, request to be buried with their siblings and parents--which leaves their spouse to be buried with their siblings and parents. Isn't that odd? Maybe I'm odd. R explains that plots are expensive and people want to take advantage of existing family plots. That still doesn't make sense to me. What a strange time--one's last home--to decide to be frugal. I don't want to be buried, but if I were to want that, I'd want to be with R.
Back to Gwen. R and I spent last weekend with RM in the Laurentians near the nursing home where Gwen now lives. RM had offered to bring her mother to church on Sunday. I'm not a churchgoer but R and I wanted to accompany them so we could see Gwen who, we already knew, wouldn't remember us.
There was a small Anglican church nearby. What I know about church harks back to Catholic school. R and I tried to stand and sit when expected, fumbled through the hymn and prayer books. Crowns and magnificence and eternity--not my usual pool of vocabulary. Gwen was especially happy with the singing. The minister had told us when we entered that he would bring communion to her, but when Gwen saw RM go forward to the railing, she tried to follow. R helped her to the front.
After church we went to a bistro/café in Ste-Agathe for soup and a muffin. Gwen was happy to be taken out, but the clamour of people laughing and talking confused her. RM and R kept singing snatches of music which got her singing. We were the musical table of American pop songs while everyone around us was eating brunch. When a couple maneuvered past our table to get to one in the corner, Gwen said, Squeeze on in there! RM left the table for a minute, and Gwen asked me if I knew her daughter RM who had a lovely voice.
It felt like a big life lesson to watch what the brain recalls and what it doesn't. Which habits stay and which disappear with only the vaguest trace.
When RM had buttoned her mother into her long wool coat again and knotted the scarf around her neck, she left to bring the car close to the door. R and I tried to lead Gwen with her walker but she kept stopping to pass comments on other diners and say hello to them. When I held open the door and a freezing gust of wind made her shudder, she made a cranky face and did a W.C. Fields voice. "I shoulda stayed home and played with my toys." 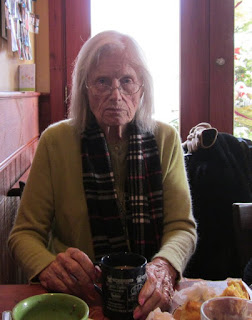