Tomorrow is the anniversary of my first heart surgery. On August 31, 1983 I had my mitral valve, which was damaged by rheumatic fever in childhood, repaired with a Carpentier-Edward ring which, it was hoped, would keep the valve open for the rest of my life. But the rheumatic scar tissue, which had thickened the valve so that it was no longer functional, began to grow inside the ring. Nasty stuff, scar tissue.
In January, 2012 I had a second heart surgery to replace the mitral and the aortic valves with mechanical valves. That was just under nine months ago.
I don't like convalescing. I'm a bit task oriented. In the first week home from the hospital I began walking, despite the scraped snow and icy sidewalks. I wore solid, flat-soled boots. (The post-op pamphlet recommended shopping malls for these first forays into the world, but I don't like shopping malls.)
Within a month I was cycling on an exercise bike. In fact, my cardiologist recommended that I cycle and get my heart pumping hard so that it wouldn't drum so much when I was at rest. That didn't feel correct. I thought I should rest to make my heart rest. But I trust him and so I tried.
He was right. It's good to exercise your heart post-op. Show it what it's supposed to do. Assuming, of course, that you've had a good level of exercise before you had surgery. Up until my surgery in January, I was still walking every day. I didn't walk fast, I didn't walk far, but I didn't want to go into surgery with a muscle that was flabby, in addition to dysfunctional.
I was still easily tired during these first months after surgery. I took a walk and had a nap. I went to bed early. I had to be careful about lifting because of the strain that put on my chest.
In May I started back at work 2 days/wk and discovered that what tired me even more than walking was people! Within the first hour I saw more people all at once than I had in the previous four months altogether.
In earlier posts I've complained about the clicking that resonates from my chest. Castanets on the go. I have St. Jude valves manufactured in St. Paul, Minnesota--said to be the quietest on the market. I'd hate to hear what other valves sound like. Or perhaps other people lead noisier lives. I spend a lot of time alone in a quiet room with my writing--and the clicking. Although, with time, perhaps my innards have resettled so that they cushion my heart better. The clicking sounds less intrusive. Or perhaps I'm adjusting. Like R said, the clicking is the sound of me being alive.
I'm still taking a beta blocker to keep my heart beating regularly, though the dose has recently been halved to see how well I tolerate that.
I'm now working 4 days/wk. My job at the hospital is still, by far, the most tiring activity. I should probably have a quieter job, shut up in a room away from people, but I like the people I work with and I already spend so much time alone in a room with my writing. Having a job unrelated to writing was supposed to force me to act like a social creature (of sorts) for a few hours a day.
I decided this summer to forget about the scar that bisects my chest--arrow down the cleavage. When it got hot-hot-hot, there was no way I going to wear high necklines to hide my scar from sensitive eyes who, in any case, weren't looking. The scar wasn't as livid and swollen as the scar I had in 1983--because the surgeon followed the same incision line, instead of cutting into fresh flesh. I would have thought a scar on top of a scar would make more of a mess, but apparently it makes less of a mess.
This dress is especially neat because if anyone is curious and keeps staring, I can easily unzip it to show off more. It's too bad the scar isn't straight. Maybe future cardiac surgeons will do a rotation in plastic surgery as an elective. 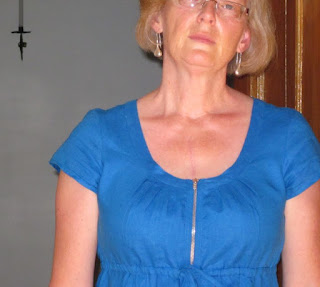