It is SO sweltering and hot this past week in Montreal. I don't want to write about how miserable the baking concrete makes me feel. How the high temps keep pollution low to the ground so I feel at constant risk for migraines. My poor heart labours. I'm fair-skinned. I can't take all this sweating!
Time to escape into a Grimm's fairy tale...

This one is called Frau Holle. Not sure how to translate that. If the word had an umlaut--Hölle--her name would be Hell. I'd like to keep that nuance in the air, so how about Helle?

A widow had two daughters, one was beautiful and made herself useful, the other ugly and lazy.
--already going against the trend of pretty and lazy, ugly and busy

Yet the widow loved the ugly, lazy one, who was her real daughter, more than the other who had to do all the work and be the Cinderella of the house.
--yes, yes, talk about self-referential! The Grimm's brothers were post-modern before post-modern was an egg in the ovary.

Every day the poor girl had to go into the city and sit by a well and spin so much that her fingers bled.
--I'm not sure how she did all the work in the house AND sat by a well spinning--nor, for that matter, why there was a spinning wheel by the well, but hey... I have an itchy suspension-of-disbelief button.

One day the spindle was so bloody that she bent to the well to wash it. It bounced from her hand and fell. She cried, ran to her stepmother, and told her how unlucky she'd been. Her stepmother scolded her  hard and without mercy: "If you let the spindle fall, go back and get it." The girl returned to the well with no idea how to get it. In her deep fear she jumped into the well and fainted. When she woke, she was in a beautiful meadow where the sun shone and flowers bloomed. She began walking and soon came to an oven full of bread.
--remember, this is the early 19th century. This is a wood stove, probably with a cast-iron door. The closest you'll get to this in a modern city will be a wood-fired stove for baking pizza or bagels.

The bread called: "Pull me out, pull me out, or I'll burn! I've been baked for a long time already!"
The girl grabbed the bread peel and pulled all the bread out.
--not sure how to translate Brotschieber, the tool she uses to lift the bread from the oven, so I googled "remove pizza from oven" and see that the word (makes no sense) is a called a peel. It looks like a large, flat paddle. But if I call it a paddle, you'll think the dough still needs to be mixed, right?

She kept walking and came to a tree hung with apples. The apples cried, "Oh, please shake us, please shake us, because we're all ripe!" She shook the tree and the apples fell as if it were raining, and kept shaking until not a single apple was left.
--note that this is the first mention of rain which becomes an important movement in the story. To my way of thinking, making apples fall from a tree would result in a lot of bruised apples, but that might be a cultural difference. Maybe Germans like bruised apples.

She piled all the apples in a heap and kept walking.
--this is a story, so we all know. She's got a third test coming up. One, two, three.

She finally came to a small house with an old woman at the window. Her large teeth terrified the girl so much that she wanted to run away, but the old woman called to her: "Why are you frightened, dear child? Stay with me, and when you do all the work in my house as it should be done, then all will go well with you. You only need to be sure to make my bed properly and shake it up until the feathers fly. That's what makes it snow in the world. I am Mrs. Helle."
--this is not just a duvet. When the brothers Grimm were writing, mattresses were feather too. I've slept in a bed like this in the Alps.

Since the old woman spoke so kindly, the girl summoned her courage and entered the house to serve her.  She took care to satisfy the old woman and shook her bedding until the feathers flew about like snowflakes. The old woman treated her well, never spoke a harsh word, and every day the girl ate boiled and fried food.
--??? not sure about this last as a measure of success, but I'm guessing it's a sign of luxury to eat food that's been cooked.

After she had been with Mrs. Helle for a while, she grew sad and at first couldn't tell what was wrong, until she realized she was homesick. Even if her life was a thousand times better here than at home, she still yearned to go home. "Even if everything is so much better here, I can't stay any longer. I miss my peeps."
--a laudable sentiment which might yet put this story in the running for a Hollywood movie

Mrs. Helle said: "I like that you're homesick, and since you've served me so faithfully, I will take you back myself." She took the girl by the hand and led her to a large gate. The doors were opened and as the girl walked beneath, a tremendous shower of gold rained down, and all the gold hung upon her so that she was covered in gold from head to toe. 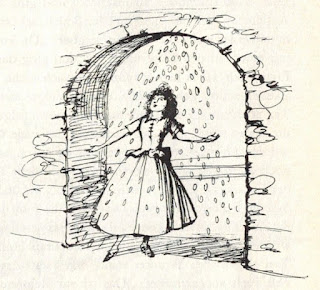 "This is for you because you were so good," said Mrs. Helle, who also gave her the spindle that had fallen in the well. The doors shut and the girl found herself up in the world again, not far from her mother's house, and as she walked into the courtyard, the rooster who sat on the well crowed:
Kikeriki,
Our golden girl is she!

The girl went in, and as she was covered in gold, her mother and sister welcomed her. She told them everything that had happened, and of course her mother wanted the ugly, lazy daughter to have the same riches too. She told her to go sit by the well and spin. When she wanted to make her spindle bloody, she pushed her hand into a thorn bush to prick it. She threw the spindle in the well and jumped in after it. As her sister, she came to the beautiful meadow and followed the path. When she got to the oven and heard the bread crying to be taken out before it burned, she said: "Do you think I want to get myself dirty?" When she reached the apple tree and all the apples begged to be shaken free because they were ripe, she said: "And have one of you fall on my head? No way."
When she came to Mrs. Helle's house, she wasn't afraid because she'd already heard about her big teeth, and immediately offered her services.
On the first day, she busied herself around the house and did all that Mrs. Helle asked, because she thought of the gold she would get. On the second day she did less, and on the third even less. She didn't even want to get out of bed in the morning. She didn't make Mrs. Helle's bed, nor shake it up until the feathers flew about.
--there you go. That explains why some winters we get less snow.

Mrs. Helle soon tired of her and said she should go. The lazy girl was glad to leave. She thought that now  she would get her shower of gold. Mrs. Helle led her to the gate, but as she stood beneath and waited, a large basin of pitch poured over her.
--pitch is like tar. There's the expression, black as pitch. The German word--Pech--is interesting because it also means bad luck. Pech haben means to have bad luck.

"That's in return for your help," said Mrs. Helle and closed the door. And so the lazy girl returned home, covered in pitch, and the rooster on the well crowed:
Kikeriki,
our dirty girl is she!
The pitch clung to her, and for as long as she lived, she couldn't get rid of it.

If you've read this far, you deserve one of the few happy illustrations in my copy of Grimm's. It's at the end of this story. Mrs. Helle in action: 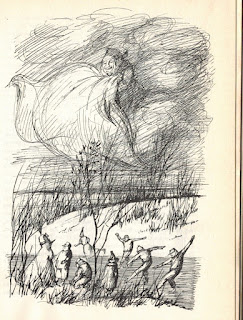