I woke this morning remembering our hotel in Paris in 1985. It was in the Marais, a narrow stone building crammed with rooms. Ours was on the top floor which was actually the attic. Twenty years earlier these must have been servants' quarters. The stairway to get to the attic was barely wide enough for an adult human dragging a humongous backpack to scrape through. The walls were low, the ceiling gabled. There wasn't a window but a skylight that belonged in a Monet painting of a Zola novel--both decorative and desperate. The toilet in the hallway had a window which was kept open. Wings fluttered when you opened the door. Pigeons scattered droppings in their fright.
We'd found this attic room after spending a night in another hotel where the carpet in the room was embedded with olive pits and baguette crusts. We were travelling on a budget.
It rained the last day of October, 1985. I felt sad that it was Hallowe'en and no one seemed to know or care. R and I walked along sidewalks plastered--and slippery--with the wet leaves of the plane trees. Plane tree leaves look like gigantic maple leaves, but they hadn't turned colour as the maples did back home.
We'd worked for two years and saved our money in order to spend a year in Europe. Of course, our families thought we should make a down payment on a house, but we figured we could do that when we were older. We wanted to see what we could see which, in retrospect, was a great plan, though at the time I complained about cold hotel rooms, surly Europeans, cheaply prepared food.
We'd started in London, staying with a friend in a cold water flat. Whatever else we did or saw in England, I never recovered from the shock of discovering that the whole of my education (during the 60s and 70s, remember) lauded English history, literature, and cultural achievement--and yet there were people living in London, England without hot water. Not in a benighted cottage down some farmer's lane, but in a flat on Fulham Road a twenty-minute drive from the Royal Opera House in Covent Garden. Our friend wasn't poor or stupid. He worked as a librarian. When I asked him how he took a bath, he snatched a tin and sprinkled talcum powder on his head. How jolly.
Fast-forward from England to Holland to Belgium to France. In our attic room in Paris, I had to pay the fellow at the desk 5 francs to take a shower on one of the lower floors. The bathroom wasn't heated. When I complained, the man told me that cold was good. Ça tue les microbes. It kills germs. He sat at the desk in a black leather jacket and gloves.
We stayed in Paris for two weeks and finally moved to a room on a lower floor. This room had a window and a hot water radiator, which was tepid at best. As well, every time la bonne made our bed, she opened the window. I made the bed myself. She still opened the window. R bought a roll of hardware tape and taped the window shut. The primitive insulation must have seemed too much trouble to unstick. She left it in place. Our room was never warm but at least we'd stopped it from getting colder.
Aren't I a complainer? A year in Europe! Canals, baroque façades, Mirò, Klee, sheep on the English moors, the Rhine, Vermeer, Van Gogh, vin nouveau and fresh walnuts... We saw and tasted and smelled and listened. I have notebooks scribbled with details and pasted with wine labels, train tickets, museum postcards, hotel bills. But at the time, I craved a hot shower and a warm bed. For sure, they were available, but they were luxuries. They cost.
And then the big puzzle: no shower or heating in the room, but next to the sink, this strange object, a bidet. You have to remember, this was 1985. There was no internet. 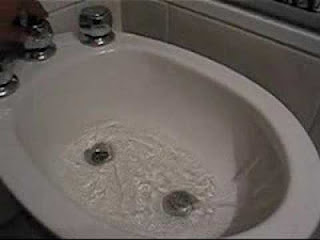 I ogled it, perplexed. What was its purpose? It couldn't be a toilet because you couldn't flush it. If it was a sink, where was the faucet? Was it for... washing out your socks? Was it clean? What had other people done there?
I asked Parisians what a bidet was for. One person told me the question was indecent. Others seemed shocked that I didn't already know. Didn't Canadians have bidets?
Not sure why I woke this morning remembering that room in Paris and how I never got a straight answer about the bidet. On Youtube I see people use them for washing their bottoms.
Posted by Alice at 12:08 PM