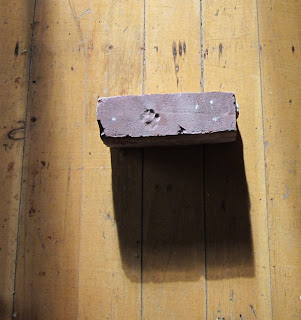 The bricklayer, who's taking off our old bricks and turning them around, told us that our neighbour shows up at all his job sites asking for any cat bricks he finds. He says that in the 19th century, when bricks were laid out to dry, cats sometimes walked across them. (Of course, it would be a cat, not a dog.) People collect these cat bricks.
I thought he was telling stories. It sounds like an urban myth, doesn't it? Then he gave us this brick. Our very own urban fossil!
Posted by Alice at 11:52 AM