We stole a few days away from Montreal to head out to the Gaspé. Seagulls and hot peach sunsets. Beach shacks selling shrimp poutines.
Even on a warm sunny day, the air is damp. The wildflowers—Goldenrod, Chicory, Purple Loosestrife—are hyper-brilliant. The grass around the house is tender and rich as butter lettuce, the pile thick and luxuriant as a carpet. When I walk to the shed, my footprints leave a diagonal trail.
R and I have been discussing the door on Madonne’s house, which is now ours. The ugly metal door faces the water—ie the wind off the water. When we were here last March, the wind whipped snow in horizontal swathes of punishing white. That day the car was completely buried in snow three times. Three times we dug it out to start the engine. The door of this house has withstood many such storms. Gale force winds, battering rain, a higher concentration of salt than people put on their fries.
Originally the door was factory grey. At some point it was painted red to match the trim around the windows. Maybe ten years ago the trim and the door were painted yellow.
I used to wonder about the bright colours of Maritime houses—hot mustard, carnation pink, aquamarine. Last winter when we drove down the coast--with white snow, grey rock and black trees on one side, and snow and a grey horizon of ice on the other--I was glad for these shouts of colour along the road.
We haven’t decided yet what colour we’ll paint our house which is a dirty white now with yellow trim, flaking here and there. The house should be painted, but the upstairs is still a construction zone of roughly sawn boards. Downstairs, a small unit of kitchen cupboards have only just been installed. What to do next is a constant game of priorities, especially since we only come every few months.
Of course, the neighbours want the house painted. Thérèse, especially, feels entitled to an opinion because her brother, Madonne's father, built the house 70-odd yrs ago. Thérèse lives down the road in a two-story saltbox with ten dozen cats. When R brought her the old doors from our house (broken, some only 5 feet high) that she asked to have for firewood, she gave him a pair of wool socks she’d knit. The socks are so thick that they don’t fit inside shoes or boots. Basically they are boots. As I'm writing, I see Thérèse on the side of the road with her large turquoise purse, thumb out whenever a car drives by.
I spent Saturday going through Madonne’s old dishes, deciding what to keep. There were thirty soup spoons but only two forks. Cut-glass pickle dishes. Parfait glasses. I don’t do parfait. Pickles... only occasionally. Straight from the jar is fine with me. What did Madonne do with so many carving knives and serving forks? How much roast did she eat? (A car just stopped to pick up Thérèse.) I filled two boxes with soup spoons, tin Expo 67 platters, church-bazaar flowered plates, teacups and saucers. We’ll take the boxes back to Montreal where we’ll put them on the sidewalk. They’ll be emptied—every last cookie cutter and snail fork—in no time. We live in a neighbourhood of garbage aficionados.
We’ll paint the house eventually. We thought we’d change the door too. The latest coat of yellow has blistered, exposing the weathered red—equally corroded—beneath. Rusty fissures gape on grey metal. The effects of salt and wind and rain and cold. But the door itself is solid. I wish our door in Montreal fit so well in the frame. It's a good door. We’ve decided to keep it.
I wish R luck trying to explain environmental art to Thérèse. 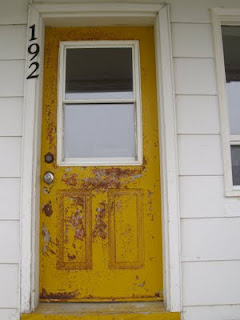