The Three Spinners was one of my favourite Grimms stories as a child. I loved the upside-down logic where laziness and sneakiness were rewarded. And I love the illustrations. The three spinners are ugly, but in an endearing sort of way. Here's one: 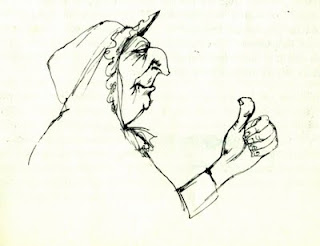 Beaked nose. Enormous thumb. Top teeth missing. But she's got a frill on her bonnet and she's sort of smiling.
Of course, these spinners have nothing to do with spandex and indoor cycling. This is old-fashioned spinning as in twisting animal or plant fiber to make yarn.
In this story a girl was so lazy that, no matter how much her mother scolded and threatened her, she wouldn't even touch a spinning wheel. Her obstinacy filled her mother with such rage--one of my favourite German words, Zorn--that she beat the girl until she screamed.
The queen, who happened to be riding by, heard the girl's cries and entered the house to ask the mother why she was hitting her daughter. The woman was ashamed--not to have been caught hitting the girl, but to have to explain that the girl was so lazy. (Yet another Grimm's fairy tale mother. Are there any nice moms in these stories?)
The mother thought quickly and said, "My daughter won't stop spinning and I'm so poor that I can't afford flax."
Flax is the plant fiber that's spun to make linen. Nowadays we mostly know flax for its seeds which apparently reduce cholesterol.
The queen said, "I love nothing better than the sound of a spinning wheel. Give me your daughter and I will bring her to my castle and give her flax galore."
The mother was delighted. (To be rid of her daughter? To think of how her daughter would be punished if she didn't spin?)
The queen brought the girl to her castle where she had three rooms filled from the floor to the ceiling with flax. "Spin all this," she said, "and I will give you my eldest son for a husband. It doesn't matter if you are poor if you can show me your cheerful labour."
The girl was terrified since she couldn't spin. Once the queen left, she cried and sat for three days by the spinning wheel without moving. On the third day the queen returned and was surprised to see that the girl hadn't touched the flax. The girl said she was too homesick for her mother. The queen said she understood. "But tomorrow you have to begin to work." (No pushover, this queen.)
Alone again, the girl stood at the window despairing. There she saw three women walking along. One had a broad flat foot; the second an underlip so thick and heavy that it hung down her chin; the third an enormous thumb. 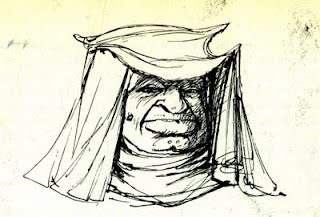 The three women asked the girl what was wrong. "Hm," they said. "If you'll invite us to your wedding, call us your cousins without shame, and invite us to sit at the table with you, we can spin that flax for you in no time."
"Oh please," the girl begged.
The three women set to work. One drew the fiber and rocked her foot on the treadle of the spinning wheel. The next slid the yarn along her lip. The third wound the bobbin and slapped her thumb on the table. Each time she slapped her thumb another bobbin of gleaming yarn dropped to the floor.
The queen came every day to check on the girl's progress. The girl hid the three women (where?) and showed her the bobbins of finely spun linen. The queen praised her no end.

The three women finished in the first room, the second, and the third. When they left, they reminded the girl of her promise. "Do what you said and you will get your reward."
When the queen saw the rooms empty of flax and the great heap of bobbins, she began to plan the wedding. Her son was pleased to be getting such a clever and busy wife.
The girl said, "I have three cousins who have always been good to me. I don't want to forget them now. Please let me invite them to sit with us at the wedding."
"Why not?" the queen and her son answered.
When the wedding festivities were well underway, the three "spinsters" arrived in magnificent finery.
Note that only now, at this point in the story, are they called spinsters--Jungfern. Earlier in the story they're referred to as spinners--Spinnerinnen. It was so time-consuming to spin yarn that only unmarried women could devote themselves to it. So the concept evolved in general, and as a specific word in English. In the mid 1400s a spinster was a woman who spun thread. By the 1600s a spinster was a woman who had never married.
The bride said, "Welcome, dear cousins."
The groom said, "Goodness, they look nasty."
He approached the first one and asked, "How did you get such a broad flat foot?"
"From treadling the spinning wheel," she said. "From treadling."
He asked the second, "What happened to your lip that it hangs like that?"
"From licking the thread," she said. "From licking."
"And you?" he asked the third. "Why do you have such a huge thumb?"
"From winding the thread on the bobbin. From winding the thread."
The queen's son drew back, alarmed. "That settles it. Never again will my beautiful bride touch a spinning wheel."
Thus was the lazy girl rid of the hateful task of spinning.

So what is the message of this story?
With help, you can disguise your laziness.
Ugly strangers can be more helpful than your mother.
Remember your promises.
Vary your activities or you'll end up deformed.
Posted by Alice at 6:25 PM